This is an uncharacteristically long one. Have a cup of coffee?
I have a foe. Her name is Sally Maria brother. She is my nemesis and we spend days wrestling and struggling. I call her names, she retaliates. I attack her with fury; she gets me back every time. I complain loudly to my husband about her behavior, she sits in quiet smugness and simply and passive-aggressively refuses to comply. She baffles me with attitudes and results I cannot understand. She gives me trouble that leaves me confused and not even the handy manual that came with her can help me out of the frustrating mess she sometimes makes.
Before you judge this pastor’s wife for having an enemy she loathes so passionately you must know who Sally Maria brother is. SM is my sawing machine. My very first one. And at this rate, my last one too. One of these days, SM will find herself hurled out of the window of my dining room to an untimely death in the oblivion of the curb on trash day.
When I became a stay-at-home mom I found the joy of certain hobbies I had always thought I had neither the time nor the ability to do. For the most part I have found the time, but not the ability. However, that has not deterred my stubborn, persistent nature from trying and trying and trying until some type of result has been achieved. So far, I have marginally successfully learned to cook, bake, and crochet.
Since I taught myself to read a crochet pattern I thought...If I can read a crochet pattern, how difficult can a sewing pattern be? I must have been thinking out loud because the next Christmas my mother-in-law presented me with Sally Maria brother. To the machine’s credit, it is a beauty. My mother-in-law shops the sales, so it is a very nice machine for a rookie. She came with all these gadgets and thingy bops I had never seen and had have no idea how to use. 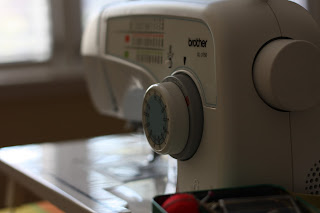 I could not wait to take SM out of a run. First I went to the web, my source of all education, and tried to find patterns to use. I tried a couple in vain and then decided to go to the big dog: Hancock Fabric. I must have looked like a deer in the headlights my first time there because three different attendants surrounded me quickly and starting all talking at once.
I managed to leave there with a pattern, buttons, thread, and a cheap cut of fabric to try my hand at an “easy” jumper that should have taken two hours, according to the pattern cover. Four exhausting days later, a million hours logged into Google looking up terms and how-tos, Isabel wore the jumper exactly twice before it fell apart in every seam I had painstakingly sewn. 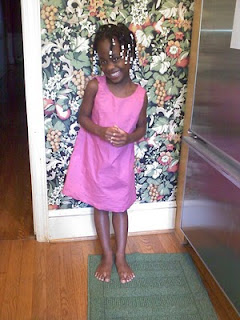 Undeterred by my clear lack of sewing ability I went back to Hancock and bought a more expensive corduroy to try the “easy” jumper again. Thank goodness practice makes perfect because this time the jumper held. You can still tell it is homemade, but it is no longer disposable.
With the jumper success fresh on my mind, I figured I would tackle a bigger and better project. One with sleeves and buttonholes and let SM show me what she could do. I still had not realized that in sewing there is an intimate partnership between seamstress and sewing machine. It takes two to tango here and if one is a temperamental, difficult, and moody dancer the result is an angry Argentinean dance. When they both are, the result is…war!
SM heard me talk about my new project and decided I had been too dense to get the message she was sending me with the poorly constructed jumpers. The silk gloves came off and SM put on her fighting gloves. This time I would hear her loud and clear: I don’t like you, rookie!
I have a theory that SM is angry that she ended up with me. I think she feels she was destined to belong to a great seamstress like my sister-in-law, Kristina, who would partner with her in making amazing little outfits and beautiful, fashionable getups. Instead, fancy SM is stuck with me. A rookie. Someone who lives by the little manual that came with her and cannot even change the color of the thread without looking up the directions. So she rebels every time I want to work with her. She is teaching me who is boss. I am humbled with every project. I need a sewing machine whisperer! 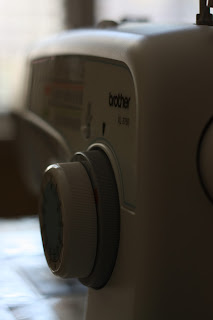 Which brings us to our latest epic battle of wills. For the last week I have been cutting, measuring, basting, and sewing a little fleece dinosaur jacket for Noah. This particular boxing match between SM and me had four rounds and several trips to Hancock.
Round one started with the sleeves. They were certainly tricky and SM was vicious. What the internet said she should do, SM refused to acknowledge. I had almost decided to make the jacket into a vest when I sought the advice of more experienced fighters and I prevailed finding a way to attach the sleeves in an almost seamless way. Round one went to me.
Then it came time to make the button holes, a new adventure for SM and me. By the end of the second round the jacket had a hole, true, but it was not where the button hole should go and it was not stitched on the sides like a buttonhole should be. It was just a hole. So I retaliated with an ingenious strategy to make the hole into a button hole. I won round two as well. After all I have a brain and SM doesn’t…I don’t think. The jury is still out on that one.
The third round came when it was time to sew the actual buttons. I had wisely bought six buttons when I only needed four. SM decided it would be fun to break them one by one. No matter where I placed them, how I placed them, what I adjusted, crack…the button would go. I ended up sewing the left over ones by hand and I had to go back to Hancock for a couple more. She won that round.
Round four came when I realized I had put the button holes on the wrong side of the jacket so now the cute little pocket was covered up when the jacket was buttoned. Off came the pocket but it was not possible to place it on the other side. I decided to make another pocket and place two at the bottom on each side. A pocket is simple. You cut the rectangle, you hem the edge and you stitch to the garment. SM fought like a banshee. One by one I would cut a pocket only to discard it because SM would chew it up and spit it back at me in shreds. She would tangle the thread. She would use up all the thread on the bobbin. She would eat the material deep into her bowels. I ended up cutting five different pockets, all thrown away.
Matt came, took every screw out, could not find anything wrong. Of course whenever he was around, flirty little thing would behave like a dream. As soon as he left, she would act out again. But after a long afternoon of fighting I won that round. I successfully sewed two pockets, a little crooked and uneven, but functional nonetheless.
After several exhausting days of wrestling with this obstinate piece of metal with an attitude I was ready to put her away in the attic and give up as soon as this project was done. You win, SM: I will never be a seamstress…
But then at lunch yesterday, when the jacket was finally finished and hanging on the shoulders of its rightful owner I was handed the final score card: I had lost a couple of battles, but I had won the war. I knew it when Noah bowed his little head in prayer before our meal and he thanked Jesus for the dinosaur jacket mami had made for him.
Oh, Sally Maria brother, for such a prayer I will gladly spend my days in battle with you. 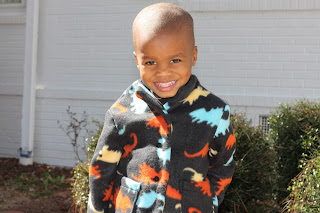 I can't sew, either. Like you, I figured if I could cook, bake and crochet, I should be able to do it. I love fabric stores - I used to work next door to one and always wondered what I'd do if I actually let myself buy all the cool fabric. But threading the needle and the bobbin were always too complicated. But you are better than I, because you stuck it out and made it work. That jacket is so cute!

Thanks, Deborah. He is enjoying it. I'll get better. Isabel asks for all kind of complicated outfits now so I better learn.

How sweet! You have precious children! And what a cute little jacket!

I don't know how to sew, either, and I don't even owe a sewing machine. It's on my list of things I'd like to learn some day, but that day is a little further away in my future!

First of all, that dinosaur jacket is adorable! He looks so precious in it! Secondly, I have recently also acquired a sewing machine and the hubs and I decided I would sew a crib skirt, curtains, and blanket for the nursery since the bedding I loved ended up selling for a small fortune on ebay. I took sewing classes for three years in elementary school, but somehow after studying the sheets and sheets of tissue paper that are called a pattern I'm a bit concerned about how this will all turn out. Please pray for me! LOL

You are doing better than I did. I managed to break three sewing machines before giving up. I would like to try again, but I'm a little hesitant.

I love the outfits you made for Isabel and Noah!

@Katie, you can do it! Google will become your friend. You can find a video on ANYTHING the pattern asks you to do and more ;)
@Jamie, wow. I think I would have given up too after three machines ;) I think you should try again. If I can sew I think anyone can because I'm not very crafty at all.

=) This is great Gaby... And by the way, fleece isn't the easiest thing in the world to sew.

now, I feel guilty. My dutch oven has a name and my sewing maching doesn't. bless her little heart. That is my task for today.