Linking this to Mama Kat's Weekly Writers's Workshop...
June 21st,.
This is the day we became a family in the eyes of the law. We had been together for three months by then, but it was not until that hot June day that the state declared “The Johnsons” no longer a family of two.
The building was crowded. The faces around us were mostly long and sad. Divorce proceedings, custody battles, child-support disputes. We were dressed like the lawyers: suits, ties, high heels. But among the somber faces, the angry stares, and the desperate wringing of hands our countenance was dissonant for we could not keep a smile from our faces.
A young couple with a small baby. A happy young couple, with a happy baby, with a smiling lawyer with easy laughter, and many hugs and kisses. Such as that we were that morning like a ray of sunshine through a cloud of rain.
We waited in the lobby, laughing, making plans, cooing the baby and passing her around. Then they called us in. Neither of us had ever been inside a courtroom. It felt so formal and so real we became serious and thoughtful. The judge looked at us with narrow eyes, studying us, as if trying to figure out what this case would be about, what new dissension and conflict would she be called to mediate. Then her eyes traveled over the dossier on her desk and she looked back at us with a broad grin on her face.
She motioned us forward, said a word or two to our lawyer and asked us to sit down. She read some preliminaries and told us how pleasant it was to do our case in the midst of a morning of strife and broken families. Next she called us to the stand…
Our lawyer had prepared us. He told us we would be witnesses in our own case. Standard procedure, he said. Technically we are suing the adoption agency for custody of Isabel, except in this case everyone wants you two to win the case. It’s just a formality, he said.
So I went up first. Like the movies, I sat on the witness stand, raised my hand, swore against perjury. I was asked my name, my age, and some biographical information. Then the judge asked:
Why do you want to be this child’s mother?
I was not prepared for that question. My throat closed and my eyes became blurry with gratitude. For what seemed like an eternity I could not speak.
How do you sum up the hope with which we filled out the paperwork for a child we had not yet met but already knew we would love? How do you explain the wistful waiting time of a paper pregnancy, preparing a wardrobe in neutral colors, imagining the hue of a pair of eyes never seen before, and the tones of a skin that was unfamiliar yet surely just as soft and sweet as that of any real or imagined baby?
How do you state in words the feelings “the call” ensued in our hearts? The joy that filled our ears as we heard the details of this angel we were being offered? The longing to jump in the car to go bring her home right then and there and having to wait two never-ending days to get to her? The heartbreak of knowing our joy would be another’s pain?
How do you answer a question that encompasses the first time our eyes met, the first time our arms held her, the first night she slept under our roof, the first moments she was our daughter?
How do you describe the strong bond, immeasurable love, incredible memories, wild protectiveness, fierce possessiveness and immense togetherness the last three months had brought to our world?
How do you put that in words? How do you define the depth of emotions that is parenthood?
Because she is ours…
That was good enough for the judge. That was good enough for the adoption agency. That was good enough for us. That was good enough for the Lord. All in agreement, papers were signed. 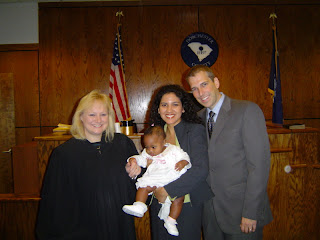 A little over a year later, one November morning, we did it again. The same courtroom, the same lawyer, different judge.  I would like to say it was easier this time. I thought it would be. I assumed it would be.
We are old pros. We have been there. This time no tears, just joy.
I was wrong. I knew the question was coming. I had rehearsed a more cohesive answer. One that was more complete and would do better justice to the vastness of my feelings. But I was wrong. All that came were tears of gratitude. All that came out was the same answer.
Because he is ours…
But yet again, and forever, that was reason enough.
by Gaby

That is so sweet. I went with a totally different kind of date to remember....

Stopping by from Mama Kats.

What a sweet story!! And I'm sure cases like these are such a bright spot in a judge's day.

Thank you for stopping by Pegbur7 and Jenners!

"How do you sum up the hope with which we filled out the paperwork for a child we had not yet met but already knew we would love?"--beautiful words, Gaby. I experienced my own lump in the throat reading about your answer to that question.

Oh geez. Now I'm boohooing at my computer on a Friday morning! Wow! I'm so glad you shared that. I didn't even know you had to do that - all the things those of us who haven't experienced adoption don't know about the process. Maya is wondering why I am tearing up. : )