This is linked to The Gypsy Mama's Five Minute Friday prompts. You write for five minutes. Period. Here is what I've got.
Five years ago this month we were pregnant with waiting. We had been for only two weeks and we had no idea how long our gestational paper period would last. We were hoping against hope for less than a year. We knew not the gender of our child. We didn’t know the color of the skin. We didn’t even know how old he or she would be when we were called to bring this baby home. We had no magic sonogram to tell us those things about the child that would be ours. We just knew the Lord knew. We just knew we were praying for this unknown child that was growing in our hearts.
Five years ago we didn’t know that within two weeks we would be called to hop in the car and drive three hours early one morning to pick up a daughter. We didn’t know, five years ago, that she was already here. She had been born last month. She was already waiting for us.
I think about who we were five years ago. We were a family of two. We ached to be a family of three. We were at a strange, unknown, limbo-like place with no end in sight. But the God who goes before us was already there, He had seen her birth, He knew the color of her eyes, He was working it all according to His will. He had plans for all three of us. Plans of hope and plans of future. And He was waiting for us when we arrived at March 10th and a daughter was delivered to us. 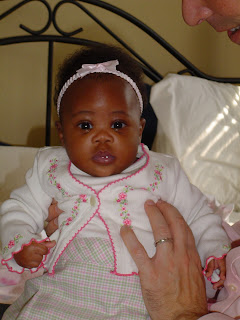 Oh my goodness, she is beautiful! I popped over from The Gypsy Mama, and I'm so glad I did. Love your love-filled post. :)

Sounds like someone had a birthday recently. Happy belated birthday, Isabel! Adorable picture, too.

Love it! I came from The Gypsy Mama too, and was so encouraged to read of the Father's good gift to you, and your joy in receiving her!

Oh my goodness, my heart just got all goose-bumpy on the inside. Amazing to look back and know what God knew all along. Sure helps us when we look forward, doesn't it?

Thanks SO much for sharing!

Great post! I came over from the gypsy mama...and I wrote about what waiting for a girl, but not getting one is like.

Thank you all for stopping by and for your kind words. She is one of two loves-of-our-life. The other one is all-boy, all-three-and-a-half.
It is so comforting to know God goes before us, Lisa-Jo. It makes the dark days of unknown and doubt bearable.
Deborah, she turned five last month!

Ohhhh so precious . . . and she is beautiful! It's so neat to see how His ways are so perfect!

That. is. beautiful. I love it when God does stuff like that! hehe

Hi. I came over from Gypsy Mama. Isn't it so cool how God has our children in mind when he speaks to our hearts. We could never know how big His plan is or where He will take us. But He knows.

Oh, I just love how God has a plan and your story reminds me to trust in Him for HIS PLANS for me! Oh, and I love that you are teaching them to be bilingual. I grew up that way too and I think it changes your worldview. Awesome! They are going to be amazing people for all you are investing into them! Amazing!

Lindsey, you're right: you don't just learn a language but a culture and a worldview.
Jeenifer, haven't these five years gone by so fast?