Lessons from a piano

When I was sixteen I walked into my room one afternoon after school and found the most perfect present I had ever been given: a beautiful, oak-color, upright Yamaha piano. And just as quickly as it came to me I had to sell it when we moved to the USA shortly after.
I started playing the piano when I was three. I was given a toy piano and a love affair began. I was not able to start formal lessons until I was about eleven and, until that day on my sixteenth year, I always had to practice in borrowed piano classrooms.
Playing the piano was my escape during the difficult teen years and when we moved and I had to leave my world behind, one of the most painful things I left was my wooden friend.  I vowed I would own another one as soon as I could afford it.
It wasn’t until I had been married three years and we bought our first house that we had the space to put a piano, although not the funds. So I started saving my birthday presents, doing odd jobs to make some extra money and after about a year I had a modest thousand dollars. A thousand dollars for an upright Yamaha is merely pocket change. But Yamaha had the piano that had my heart so Yamaha is what I wished for.
So armed with my pocket change I started searching. Nothing. What I had saved was not enough and I was despairing.  At one music store a great salesman almost sold me one for three times what I had, swearing the payment plan would not be bad. Still, Matt and I were tight and a piano payment was like another car payment. Heartbroken I walked away.
Disappointed and eager to get back to playing I had decided to lower my expectations and buy any brand of a piano in semi-good shape that I could afford because I did not want to wait another year or two.  One afternoon I spotted an ad in the paper for an upright Yamaha for two-thousand dollars. The owner was moving soon and was motivated to sell. Still, it was double what I had. But I asked Matt to call the man see what he had to offer. We left a message and waited.
It was a beautiful day, so I went outside and laid on my hammock for a while. I started to pray something like this:
Lord, I realize I’m being way too specific with my request, but Yamahas are what I’ve always known and it has been my dream to own another one since I had to sell mine. I also know, Lord, that money is tight and that it would be irresponsible to buy one on payments. I have a thousand dollars, Lord, and I am going to be a good steward of what you have allowed me to save. If a Yamaha is not what I need, then Lord, please send me to the right place and I will buy what I can find for what I have.
And then I must have fallen asleep because Matt woke me up with a look of triumph on his face. You probably know what came next:
“-I just talked with the piano guy. I only told him we were interested in his piano and he blurted out that he was ready to move to Las Vegas and that, while he had listed it for $2000, he will give it to us for $1000 if we can go get it today!”
You bet we did. And I was not worried one bit about the condition of the piano. I knew what I would find when we arrived, and a piano tuner confirmed it about a week later when he told us my beloved new purchase would sell for around three grand at a retail store. 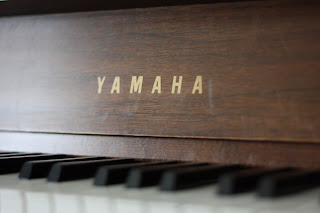 This is a good God, a loving God that cares even about these small dreams and hopes. But it was more than that.
Not only has this piano brought me hours of enjoyment and relaxation, but it became very useful a few years later when I became the piano player in both of the churches we have pastored and I needed to practice at home.
Not only has this piano brought me joy but now I am teaching my little girl how to play and care for this beautiful  oak-colored upright Yamaha so much like the one that sat in my room for too short a time. 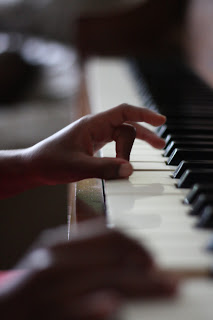 Last week I wrote about God going before me a decade so I could stay home with my kids one day. This week as Isabel took her piano lesson I was reminded that I have journal after journal of stories of how the Lord has taken care of my needs, present and future, silly and meaningful, big and small.
by Gaby

So beautiful!! What a caring God we served He gets involved in the teeny tiny details. He's wonderful.

This is a beautiful, meaningful testimony to the kind of God we serve. I am blessed by your journey. Oh, so blessed.

So sorry I was remiss in following -- but it is all rectified now. So excited to know you better.

Why are we surprised when He shows us how much He loves us by listening to all of our thoughts. He knew your want and He made it into a need. :)

Oh Gaby, what a wonderful story -- I am so touched by this, truly!

And thank you, thank you, dear friend, for your encouraging comment on my blog post today -- you are such a blessing to me.

I love this story and I love that you waited and waited . . . until God provided. Sometimes i jump ahead and miss God's provision.

I love the piano, as well.

I've always wanted to learn to play the piano. So sweet you get to share this with your daughter.

I enjoyed this post because it reminds me that God cares about all details of our lives. He plants desires within us, and then He provides.

My musician husband has the Yamaha from his childhood. 40 some years later it's still in good condition. I love how God answered your specific prayers. Serving God is such fun, isn't it?

Rejoicing with you,
Pamela

We bought a piano (a Yamaha!) before we bought any other furniture, eighteen years ago when we moved into our house. We adopted our son from the Philippines (also multicultural here!) and, when he was four, he began picking out the songs he'd heard sung in church on Sunday. I can't imagine my son growing up halfway around the world and not having the opportunity to touch a piano. Yes, God is so gracious and so good!

I want a piano!! This is a wonderful story and as soon as I saw your icon on SDG I knew I wanted to read this. I grew up playing the piano and long for one in my home now. I am so happy for you that this happened, and you are so right - God does care about the details. Amazing.

is NEVER ceases to amaze me how He cares for us in the details. the desires of our hearts He know so well. I guess He put them there yes?:) beautiful story!
xo

What a beautiful story, Gaby! I want our children to learn to play piano, as well, even though I have never played myself. We bought a weighted keyboard when we lived in Oklahoma, and I've always wanted to learn to play, but then I had kids. It is still a goal someday!

This is a wonderful story! I've always wanted to have a piano in our house. I played for years growing up, and my parents have a baby grand. We have neither the money nor the space right now, but I'm sure the time will come.