I was in the den working when I heard the noise. It was coming from behind the door of my bedroom. At first it sounded like the faint whine of a puppy and it continued in a slow crescendo until it reached a full, roaring scream: “mooooooommmmmyyyyyy, ahhhhhhhhh!” I would love to say I ran full speed to see what it was but I know my children are prone to drama, so I calmly walked to the bedroom and opened the door.

I found Noah plastered against the wall opposite the window, sobbing uncontrollably, snot and tears mingling near his chin. His eyes were fixed on the window in sheer terror. I followed them and could see nothing. And then I heard the buzz. It was loud and disturbing but it was coming from a common house fly, ugly and big but harmless.

Unless you are six.

“What’s the matter, Noah?” I asked him. “It’s chasing me!” he wailed back. I explained to him that it would not harm him and that house flies don’t bite (do they?) and to keep reading his book so I could finish my work. I shut the door and went back to the den.

About two minutes later I heard the screaming again. This time, with much less patience and an edge to my voice, I went back and reminded him that the fly would not hurt him, that I was too busy to try to chase it out of the room, and that he was a big boy, much bigger than the bug, in fact. I firmly closed the door and left him in his little private hell.

As I sat in front of the computer the Still Small Voice enveloped my thoughts: “He’s only six years old, you know? He is just scared. Can’t you be more gentle and understanding?” See, I am very practical. Too practical even. It was just a fly, for goodness sake!

But at that moment the Holy Spirit opened my eyes to my lack of empathy and helped me to see the world through the eyes of my little boy. I realized I often expect my children to think, behave and understand the world like adults. That fly was a monster against which Noah felt powerless to fight and he had no hero to show him how to conquer his dragon.

So I breathed a prayer of wisdom and patience and went back in. I held him until he stopped crying and then I told him about how a simple magazine can turn into a magic secret weapon against flies. I showed him how to use it and, while we did not kill the fly then, I left him fully armed. As I was leaving the room I mentioned in passing that if he killed the fly I would give him a medal of valor.

I returned a few minutes later when the silence was too suspicious and found him perched on the bed, still as a statue, weapon ready. I asked him what he was doing. “I’m waiting for the fly to come back my way so I can kill it!” he said with excitement. He spent the rest of the day chasing! flies until one let itself be killed by this tiny dragon slayer. As promised, I gave him a medal. 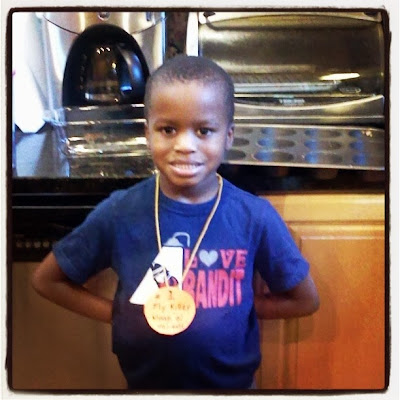 
Empathy is powerful. Noah needed his fears validated, not minimized. Once he knew he was heard and understood, he became courageous. Once someone came to his side and empowered him, he believed in himself. This morning he even tackled a cockroach with his daddy’s help!

Grown-ups need empathy too. We may not wail in public despair at the sight of our fears or openly beg for a friend to come rescue us. “You just don’t do that,” we tell ourselves, perpetuating a lie that keeps us estranged from each other, unable to let someone else step into our shoes.

But we are just as terrified and helpless before our dragons as a six-year old before a giant house fly. And sometimes we just need someone to come alongside to pray with and for us, and to encourage us to discover that we can become dragon slayers. No perfect words or wise advice. Just a shoulder and a friend.

And we may not completely understand someone else's fear or pain. We may think "it's just a fly, for goodness sake!" We may even expect them to get over it or to realize, logically, why they should not be afraid. To behave like we would in that case.

But when we stand beside them and face the window from their perspective we just may feel how big and ugly the fly looks to them.  That fly may just look like a dragon we recognize. And suddenly, our eyes are opened to their reactions and responses.

Paul understood the strength that comes in numbers. He reminds us that God’s intention for community is for us to rejoice with those who rejoice and weep with those who weep. It’s a calling to never under-estimate the power of the words: “I understand. I am with you and you are not alone.”
by Gaby

Gaby,
Love the medal around Noah's neck...Tell him, Congrats for me...and I am so proud of you for listening to the Spirit's voice of truth: children are not little adults, and much of what they find fearful is not fearful to us, but they do need our compassion and comfort...and then you equipped him after comforting him...Clapping for you, friend :)

This is a fabulous, Holy Spirit inspired and God "expired" piece of writing. I want to stand up and applaud, and I'm not kidding.

I hope you can publish this some place beyond the blog. It is excellent, and I was blessed, encouraged, and convicted from having been here this AM.

I love the medal, Gabby. What a great story and reminder that what appears harmless to us may be a dragon to another.

Julie on an adventure said...

Yes, how important that we know we can be understood and that people in community can rejoice and weep with us.

What a good picture to explain empathy, and a reminder to pursue it, have time for it, do it. Thanks.

Your paragraph: " But when we stand beside them and face the window from their perspective we just may feel how big and ugly the fly looks to them. That fly may just look like a dragon we recognize. And suddenly, our eyes are opened to their reactions and responses. And empathy happens."

Ahhh it takes time to be empathetic which really is so important. Hmmm, what will it take to help me focus on the more important things than upon my own self-imposed busyness?

This is the most beautiful post of empathy I have read.Oh that I can "stand beside them and face the window from their perspective"...so empathy can happen.