Sometimes when you are five...

Sometimes when you are five your hands are just not big enough to spread across the ebony and ivory keys of a piano but your sister’s were when she was five, and so she was playing songs very quickly and you can barely put all five fingers on the keys at the same time. So you feel small and young and a little behind.

Sometimes when you are five you have a friend named Brownie who gets to do all the bad things you really want to do and your parents won’t let you, and he calls your sister names you don’t dare say like “crybaby” and he hides her toys, and you blame it on him but you get a consequence anyway even though it was the bear’s fault. So you feel adventurous and rebellious and proud to be friends with such a bad bear.

Sometimes when you are five and you are very shy people ask you your name and you just don’t want to say it but your mom makes you so it comes out very thin, and you are asked to please say it louder but you still don’t want to and then you get scolded by your mom for being rude. So you feel frustrated because really, you are just shy.

Sometimes when you are five you like to put your Legos back in their box according to colors but that takes a while and your family is running late so you get told to hurry up and just put away those Legos already, and you have to throw them in the box willy-nilly. So you feel anxious because nobody understands just how important it is for you to put your Legos away by color.

Sometimes when you are five you want to play all by yourself for a few minutes but your sister is sociable so she wants to play with you all the time but she wants you to play her way because she is bossy, and you tell her to go away and then you get in trouble for not sharing. So you feel annoyed because all you want is some time alone and she is always there.

Sometimes when you are five and you have a bad dream your mom and dad come running to your bedroom in the middle of the night to hug you and sing to you and pray with you and maybe even take you to their bed to sleep. So you feel loved and cherished and safe.

Sometimes when you are five you get to go out with your daddy all by yourself and you go to the barbershop and then you go get ice cream together. So you feel manly and especial and you know you want to be just like him.

Sometimes when you are five you race everyone in your family down the grassy path and, one by one, they stop running because no one has as much energy as a five year old boy, not even your bossy six year old sister. So you feel fast and confident and like you just won all the medals in the world.

Sometimes when you are five and it’s your birthday your mom makes you a cake and you get to invite your best friends and you play with cars all afternoon and then you get to open presents. So you feel important and bigger.

And you decide that even though you are smaller, weaker, less accomplished, and less powerful than everyone else in the world, sometimes being five is not bad. Not bad at all. 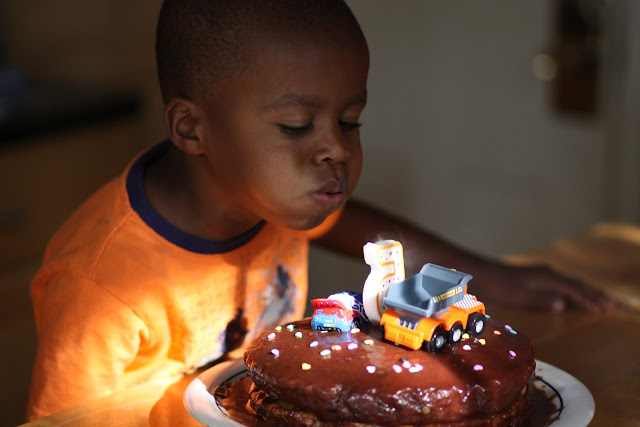 **Friends, I have not fallen off the planet but lately it seems I have had more pressings things to take care of like celebrating summer birthdays as you can see.  I’ll be back. In the meantime, may God bless you and keep you**

Email ThisBlogThis!Share to TwitterShare to FacebookShare to Pinterest
Labels: Noah

Best of birthday wishes to him and all of your summer birthdays. Yes I have missed you but knew family and summer calls first. Love how you wrote this!

Beautiful!! I love the way you write and the memories you leave for your children!

i LOVE this piece, gaby....sometimes you you are five....

Your words are such poetry, my friend.

Our daughter had a Brownie (only his name was Mr. Panda). Ohhh, that guy was always in trouble. Not listening, into hiding treats, oh, and he didn't like to share. Thanks for taking me back to times with Mr. Panda.

Your picture is awesome. A true celebration of five.

Oh, and random, but I've never asked. Is the glass house above your glass house?

Love to you. Don't worry about hurrying back. We will be here when you returen.

Hi Gabby, this is a beautiful story about my favorite 5 year old. Happy Birthday sweet Noah. Hugs and kisses to you and Isabel. I miss you both. Love ya, Darlene

I loved this! What a beautiful tribute to your child -- understanding him. Good to hear from you, friend.

I was excited to see a post from you on here. I have missed your wonderful way with words, and this post was a perfect example. I just love it and could picture each and every scene. My favorite was the one about going to the barbershop with Daddy.

But now, the one about that bad bear Brownie made me grin from ear to ear in remembrance. We had a mischievous puffalump mouse around here.

Wow! So well-written! We have lots of summer birthdays over at our house, too. And we have a "Brownie" - only his name is "Honey".

I love how you get into that little 5-year-old head! So much fun to read and relate to.

Like I keep saying--ALL the best people were born in August! Happy birthday Noah! (belated)

Happy Birthday to your son, and he is blessed to have a mom, who can empathize so well with what it is like to be at that tender age...Missed you but I understand as you were spending time with your family...Hugs, Gaby :)

I tagged you in my post http://soulstops.com/post/2012/08/23/Eleven-Random-Things-About-Me-and-then-some.aspx I hope you will join in as I would love to get to know you better :)

sorry, the link is http://soulstops.com/post/2012/08/25/Eleven-Random-Things-About-Me-and-then-some.aspx

Oh, this makes me want to be five again :) My five-year-old boy might be able to keep up with yours... but no doubt, I'd be lagging behind, breathless and slow, 'cause there's no SPEED quite like five year old boy speed :) What a joy to meet you here. Thanks for the beautiful post on Jen's break the tape series today. Love your heart and your honesty! Hope to be back to savor more words soon.