We walked hand in hand into the Goodwill looking for nothing in particular, as we often did. Me, the lover of books, would peruse the paperbacks and find some treasures for a quarter. Matt would spend his time in the house wares finding salvageable oddities. But we always avoided the children’s section. Too painful. Too pointless.

Except that day. I don’t remember if we had already started the process of adoption or not but as we looked through the store we found ourselves walking down the last isle, next to the wall covered in broken toys and teddy bears. Up on the top shelf I saw it. It was a brown, fuzzy, child-size bear with a blue scarf around his neck. It caught my eye because it looked expensive and new. It was a Gund bear. The kind you find in fancy toy stores but at Goodwill discount. We took it down, inspected it, and carried it away.

And I named him Brownie.

On the way home I dared to dream a little of a time when Brownie may accompany a child into the land of dreams and protect him or her from the bad ones. It was the perfect bear for a little one: soft and friendly, seeing the world from the same eye-level, a relatable companion.

A couple of years went by. Isabel came and filled our lives with joy. Still Brownie was relegated to live on the guest bedroom bed. When Isabel went through a phase of dressing animals as people I held a silent hope for Brownie, who could wear her clothes easily. But Brownie was overlooked and left alone on his bed in favor of smaller Pooh.

A few more years went by and we grew by one more when we brought Noah home. One evening as I prepared the kids for bed, Noah, not quite four-years old, asked to sleep with an animal as was his custom. This time he selected Brownie, who had moved from the guestroom into the large bin of stuffed creatures that now lived in the kids’ shared bedroom. Brownie, who was almost as tall as Noah, never left the bed again.

The fuzzy bear I dreamed so many years ago as a friend to the children I was yet to know  became more than a sleeping prop. Brownie is now the star of many adventures. He has traveled the world, he has lived in many countries, he has survived eating poison, he can breathe under water, he would put James Bond to shame and yet he has never left our house. He is also the baddest bear in the land. He steals money from Elmo, he lies and disobeys Noah and gets put in time-out a lot. He hits his friends and provides me with many teaching moments, as I explain to Noah why Brownie’s behavior is wrong and smile at Noah’s vicarious living through his unruly bear. 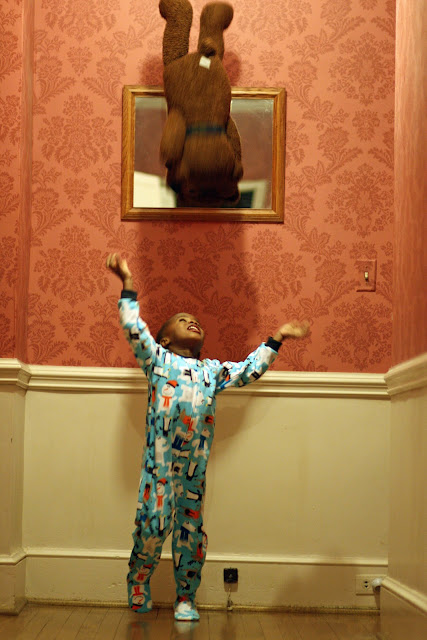 We chuckle to hear our children begin conversations with each other like this: “Remember when Brownie…” and we have to walk away so they don’t see us laugh when the other one replies: “I remember and he also…” filling one more detail of an adventure neither one of them witnessed.

I don’t know why Isabel did not take to Brownie. Maybe she had too many other choices. Or maybe their personalities simply did not “click.” My daughter is nurturing and prefers small creatures she could wrap in blankets and hold as babies in her arms. Brownie is a big bear, more of a pal than an offspring, so his charms did not work on her.

It took a quirky little boy with mischievous eyes to see the possibilities this bear’s company had to offer. They are best buds. Brownie wears Noah’s clothes and, in exchange, Noah has made Brownie the star of his childhood adventures. It is endearing. And a little nerve-racking. The way this bear acts sometimes I worry he can be a bad influence on Noah… 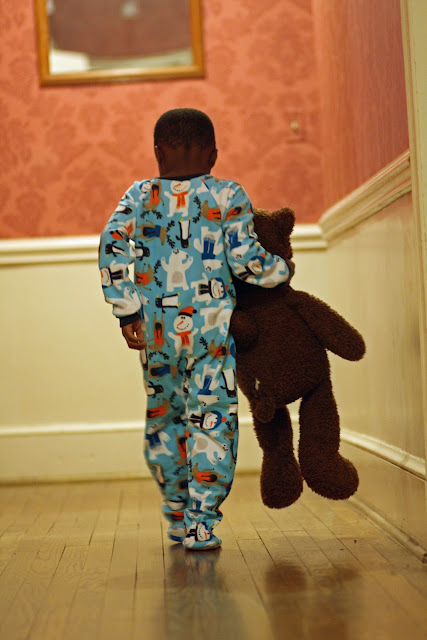 I would have danced in the middle of that Goodwill with Brownie in my arms if I had known the life he would live and the small friends he would keep.  But the afternoon we met, I cautiously held him by the ear, trying hard not to get too attached and trying not to think about his loneliness and mine, were he never to have playmates.

Sometimes you have to take a step of faith and buy a bear for an empty home, believing God keeps his promises. Sometimes those promises take you on a journey you did not expect because God’s crafted a different plan than you anticipated. And sometimes the earliest evidence of God’s plan in your life is brown and fuzzy, and wears a blue scarf around its stuffed neck. 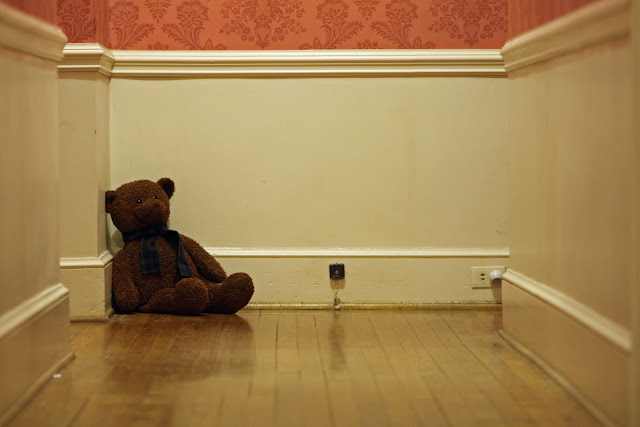 I Live in an Antbed said...

This is so very, very precious, dear Gaby! What a beautiful testimony of the Lord's Faithfulness in your life! Would you consider linking it up in our little "Pages in Our Heritage of Faith"? If you'd rather not, that's fine. Thank you for testifying to His Faithfulness! :) (http://iliveinanantbed.blogspot.com/2012/02/calebs-parenting-advice.html)

Gaby, I'm afraid this made me a bit more than weepy today. In a good way. Thanks.

Thank you for your comment, Kim. I'm glad it's the good kind of weepy :)

Oh, I would love to. I'll do it here in a few minutes!

"Sometimes you have to take a step of faith and buy a bear for an empty home, believing God keeps his promises."

When I got to this line, my throat constricted. I think it's sort of a masterpiece of a line, Gaby, and one that speaks about brown bears of all sorts.

Loved this story so much. My younger daughter has a special friend like your son's brownie. Hers used to be a mouse and has the unimaginative name "Baby". Baby sat on her big sister's shelf but was utterly ignored until little sister came along. I think that our children's special stuffed friends kind of choose them. Today, Baby is more of a shapeless blob filled with nearly 20 years of love. I'm serious about that. It's currently getting a college education, if you know what I mean.

I love it when you write with your mother's heart.

Baby must be well-loved. It makes me think of the Velveteen Rabbit, you know? Isabel's friend is imaginary: Lisa-the-monster who is now Lisa-the-person. I will write about her sometime.

Thank you for your kind words, Debbie.

i do not know why this post moved me to tears...maybe it was the footie pajamas...maybe it was your faith purchase of a friend for your little boywho was to come...whatever the reason...thank you for sharing.

Precious post! God puts desires in our heart! He knew which children you would have and that Noah would one day need Brownie!

This is so precious. I especially love the pictures: footie jammies and the pictures. And isn't interesting that the faith in buying brown bears wasn't about the first child God sent to your home but about the second. Reminds me of seeing each of us and having a plan for us. And speaking perhaps to your desire to be a mom of more than one child. :+)