Linking up today with The Gypsy Mama's Five Minute Friday (although a little late!)
Is love stronger than oblivion? Does love transcend disease and pain?
My grandfather died four years ago this summer. For the last several years before he died he suffered from Alzheimer’s. He was a career military man, proud and strong. I had not seen him in four years when I traveled to Ecuador two years before he died. I am glad I was able to see him one last time, but I don’t know if he truly knew who I was. He was frail and he was confused and he was a shadow of the man I remembered who taught me history, math, and geography as we walked down the street day after day. But the one person he never forgot, the one whose name he never mixed up, and the one he recognized until the very end was my grandmother. They were married over 50 years and until the day he died she was his sweetheart and that…he never forgot. 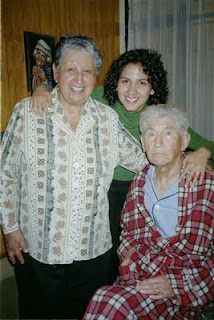 Oh, how wonderfully sweet! It's a heartbreaking disease, but how amazing that he never 'lost' his sweetheart.

What a sweet post. May we all be blessed with over 50 years of marriage!

So beautiful! I think it is a wonderful blessing when the soul remembers what the brain can forget.

Thank you, all. It is really amazing, and I love what Strings said: the soul remembers what the brain can forget.

He looks like you!
I don't remember the details, but there was a study where the spouses of people with Alzheimer's hugged and cuddled them frequently, and it actually improved their memory. It's wonderful that he had here there and remembered her until the end.