This post was inspired by my friend Jennifer’s post who reminded me to give credit, where credit is due.
A few minutes before the game I helped her put on her mustard-yellow shirt with the eight on the back. She slipped on the black shorts and we talked about the moment the whistle would blow. I pulled back her hair while we discussed how to behave if a teammate accidentally kicked her. I secured her shin-guards and we chatted about water-breaks and the snack she would have after the game. I tied her cleats reminding her that the point is to have fun. We got in the van, all four of us, cheering as we went, excitement building, talking about kicking balls, running with the team, enjoying the first game of the season.
The team had practiced twice before this game and they were stoked as only five-year olds can be. My daughter, the lone girl in a team of boys, was ready for her debut. She would run, she would kick, she would have a blast, she said. The whistle blew and the game started. Immediately a mob of kids quickly found the hot pink ball and clustered around it, following it with little regard for the assigned goals or the different colors of their jerseys. They all just wanted a chance to make contact. Legs were intertwined, little arms flew everywhere, giggles were heard.
Except from the little girl in the mustard shirt with the number eight on the back.
She remained next to her coach, at the edge of the field, overwhelmed by the exhilaration of the other children. She grabbed his hand and would not let go.
What’s a coach to do in such a moment? Should he shake the little hand off and gently push the child forward to play? Maybe. Should he become annoyed and tell her harshly to get playing and quit being such a baby? Some would. Should he let go of her hand, leave her standing on her own and go coach the rest of the team? Possibly.
But this gentle man, this giant of a coach, did what any good father would have done. He held my little girl’s hand throughout the whole game and he chased the ball with her, followed the other kids with her, and still had her hand in his when the final whistle blew.
At one point they ran by us and I heard a snippet of their conversation. She was telling him about the boo-boo she had on her leg. He was listening seemingly enraptured by the misadventures of this five-year old.  At the end of the game I thanked him for his kindness and he told me he had one just like her at home. I hope he knows that day he made a fan of a little girl and her mother. 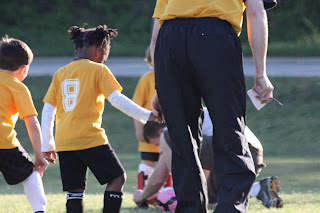 Isabel played four more games after that one. She went on to cluster behind that ball right along with the other children. She kicked many balls, ate many snacks with her team, giggled loudly, and received a trophy when the season was over. 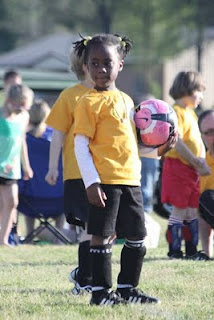 Never again did she need to hold Coach G’s hand through a game. But her coach’s compassion, his infinite patience, his insight into the heart of a scared little girl built in her a confidence and a strength that carried her through that first terrifying game and brought her back for more week after week. It was a simple gesture and it was all it took. She loved the experience, loved the game, loved the coach and she asked me yesterday if she could go back in the fall.

I pray every coach she encounters takes his or her influence in these young hearts as seriously and carefully as this wonderful man does and they teach her more about life than just the skills of the sport.
by Gaby

I loved this post, Gaby. I read with tears in my eyes at the image of this adorable little girl holding the hand of a most compassionate man. I'm so glad you shared this story.

Thanks, Jennifer. Thank you for inspiring me. I was having a bad case of writer's block until I read your post. I think you fixed me :)

that's too cute! what a wise coach!

Hey !!!
That is heart touching story. it made me realized that in life we have to face so many difficulties.