The Little Boy That Saved The Day 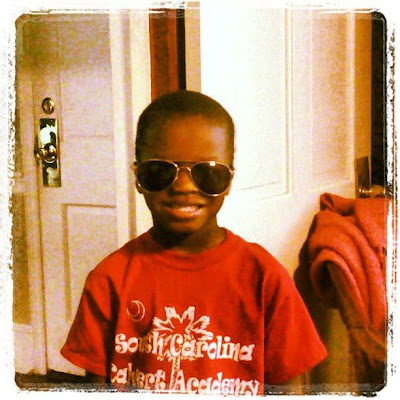 Noah is six years old today and, as we celebrate his arrival into the world, I can’t help but reminisce about how his arrival into our home, at one-month old, marked a turning-point in our story that changed the course of our family and saved our marriage.
Six years ago I didn’t know if we would make it. It is strange to say this now when our life is just right, but six years ago the story seemed to be at an end. We had been married six years, and the last one of those had been a nightmare. We should have seen it coming but we didn’t: the stress of two demanding jobs, being parents and forgetting to be a marriage, lack of communication, and selfishness had crept into our marriage quietly and relentlessly until we looked at each other one day and wondered How are we ever going to find our way back to what we used to be?
As Matt was preparing to take a new church in a town a few hours away there was discussion of me staying behind. On my part I was doing all I could to make it happen, finding excuses not to go with him: the house needed selling, the move would mean I would start a new teaching job in the middle of a semester which I did not want to do, if I quit we would lose our health insurance and go down to one income for at least a year. We were broken, lost, and desperate people. The distance between us was widening and neither one could figure out how to reach over and bridge the gap.
But God, oh, this God who goes before me, who is more faithful to me than I could ever be to him, stubbornly refused to let go of us. He had put us together and his mercy would not stop pulling us, prodding us, opening doors to opportunities to regenerate, to find our way back to each other, to obey his law: that which God has joined together, let no one separate (Matthew 19:6b. Emphasis mine).
One night in early August we received a phone call from our adoption agency. A baby was born that needed a family. We were in no position to adopt an infant at the moment. We both understood that another child was not the answer to our broken marriage because new babies can add more stress than almost any other life-changing circumstance. Of course the timing was all wrong. But this baby was Isabel’s biological brother.
How could we say no?
So we sat and we talked. And we renewed commitments. And we worked on things for the first time in a long while. And we realized we had to heal our relationship for these children’s sake if nothing else. They were ours and we had chosen to be their parents and we had to make things right between us. So we did the only thing we knew could help and something we had not done together in a while: we prayed.
And we prayed. And we prayed. And we prayed.
We asked the Lord for a renewal of the love we once had. We asked for wisdom to find the path to restoration. We asked him and each other for forgiveness. We asked for strength to obey him, for courage to follow through, for faith that He could help us, and for a heart turned upwards and not inwards. And we cried out together for his presence in our marriage.
And when we got up from our knees it was decided: we would bring Noah home, we would leave the house to sell itself, we would deal with the job and loss of insurance and loss of income, and I would move with Matt to start afresh again. We would trust God to help us do what seemed impossible to save our family.
And He delivered. As He always does.
One by one God closed the doors to my excuses and provided an answer to each of my But, Lord… Because of Noah, I was given both health insurance and paid maternity leave from my last job while I waited to start on the new one. Because I was on maternity leave I was hired to start a new teaching job mid-year, in January, in our new town. The house sold, not quickly, but quickly enough. And even though we were the poorest we had been in a while we lacked nothing.
As a testimony to God’s incredible power and grace, we were experiencing most of the worst stressors that a marriage can withstand at the same time: a new town, a new job, a new baby and a toddler, going from a house to a two bedroom apartment, the financial burden of the adoption, and the loss of one income.
Yet we had never been so happy.
This time we were dealing with life’s difficulties from our knees together. God’s timing in bringing Noah to our lives changed the end of our story. And while I don’t advocate adding a child to your family to save your marriage, his arrival shook us awake from our selfishness and self-centeredness. God had a bigger plan for us and we had a responsibility not only to survive but to thrive as a couple not only for the sake of Isabel and Noah’s future, but for ours as well.
As I thank God today for this little baby who came in the nick of time to a hurting family and saved the day, I am reminded in a small way of another little One who came more than two thousand years ago to a hurting world to save all who would believe in him.
Thank you, Jesus, for Noah’s life and for the one You gave so I could be telling this story today.
by Gaby

God blesses those who allow Him to. Lucky children lucky parents. Blessed also.

So enjoyed reading this , Gaby. Your beautiful family is an example of forgiveness and love!

So glad you shared this. So glad that our great God, through Noah, brought you back. In him, all things are held together (Col. 1:17)

Happy Birthday Noah! Gaby, Thank you for sharing how God delivered and blessed all of you as you and your hubby prayed, obeyed and trusted Him...Inspiring :)

Happy birthday, Noah. Sounds like you all are blessed to have found each other. What a tremendous story!

How beautiful this is!! Because you trusted Him -- and He would not let you go. Just lovely -- a reflection of Him.
I'm posting about adoption today, too. I'm your neighbor over at Michelle's today. Nice to "meet" you!

God does orchestrate wonderful blessings for us sometimes around the corner where we don't see it at first. His ways are past finding out and in your case you received more than you asked for.

Dear Gaby
I found your comment at Dolly's and had such a good giggle that
I had to come over to meet you! Aren't we all stopping this blogging thing daily! Noah looks like a real small gentleman with those shades.
Hugs XX
Mia

Thank you for this hope filled post. Isn't it amazing to see God at work in changing the hearts of His people...and I mean amazing as in very cool! Happy birthday to your handsome, Noah! Stopping over from Hear It on Sundays.

Gaby, have you heard the Matthew West song "One Less Broken Heart in the World Tonight"? Well and so much for your story...listen to it! You'll love it. The post I am working on has a similar theme but a different hero....always love your perspective. Thanks for sharing your story here.

I know that I shouldn't say this because, in truth, you have written so many heart thumping posts that I can't rightly pick a favorite. However, IF I were keeping track, I can't see how anything you have written could have touched me more than this one. I loved your testimony of how surrendering yourself to a mighty God who really does know the end from the beginning was step one in this beautiful, beautiful story.


Can I tell you how gifted of a writer I think you are? Really, I read a lot out here in Blog Land. Others may write more often, but you write what really matters, and you do with with a divine gift. Never, ever stop.


Debbie (Words on Wheels) I am never sure quite how to get the comment thing to work here so I'm posting as a guest.

Oh, how I love the upside down ways God works. And what a handsome little "rescue hero." THANK YOU for sharing your story and for shouting out His faithfulness. This line struck me hard today..."being parents and forgetting to be a marriage"-- with five kids, we, too, have many times forgotten to be a marriage. Your testimony inspires me. Happy birthday to precious Noah!

Super awesome story! What a smile he has. I don't know how you could ever have a bad day with that face around!

Amen! He is our All in all. Thank you for sharing this powerful story of life at the brink and God overcoming Love that brought you back into His arms with Noah and his big sister. Amen again!
Caring trough Christ, ~ linda

Wow. Just wow. I loved seeing your story written out and to know more about Noah. One day, you'll be able to tell him just what an amazing presence he was in your life at that time.

Wow, thank you for this moving testimony to our Lord's faithfulness! He can use the innocent baby to shake us out of our attitudes-- and bless the babe right along with us!

It's been awhile since I've been over here. I didn't know this part of your adoption story. So glad I stopped by. Hugs.